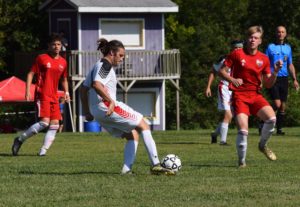 One goal by Faith Baptist in OT proved to be the difference as the Warriors fell to The Eagles 1-0 on Friday afternoon. “This was a tough loss for us,” Head coach Daniel Nichols said. “Our defense played well and offensively we created more good looks but were not able to capitalize.”

The Warriors were looking to pick up their first conference win of the season as they took the field in Belton, MO. During the first half, the Eagles moved the ball into position with good combination plays several times, but Seth Bielenberg made several key saves.  The Warriors had opportunities of their own but failed to capitalize.  The Warrior defense stood strong to keep it 0-0 at the half.

As the second half began, the Warriors desperately looked for the tiebreaker. They nearly got it off several beautiful opportunities created by some terrific midfield work from Noah Wittenbach and Aedan Wilson working the ball to Takaya Takagi.  The Warriors continued to shore up their defense with excellent play in the back from Micah Wildasin, Masaki Ouchi, Wade Smith, and Tim Gleason.

With each passing minute, the Warriors offensive urgency became that much more intense as the team worked up the field to score. Despite their efforts, the Warriors couldn’t find the back of the net. The final whistle ended to send the game to overtime in a 0-0 tie.  Six minutes into the overtime period Faith was able to break down the CU defense and finally get the golden goal that ended the great game.

Next up, the Warriors play Emmaus at home tomorrow at 2 pm.