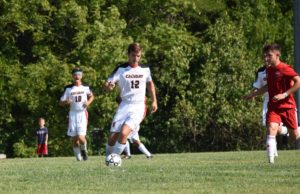 The Calvary soccer team was encouraged after holding Faith Baptist Bible College 0-0 throughout all of regulation on Friday. The team had a tougher contest against the Emmaus Eagles in a 4-1 defeat on Saturday afternoon. “We had some lapses defensively that cost us,” Coach Daniel Nichols said.  “It is still always great to play Emmaus.  I am very proud of the squad and the program Coach Brown has built through the years.  We matched up against a very good soccer team today.”

The Warriors came out creating opportunities.  Ten minutes into the game Takuya Takagi pressured their keeper and won the ball.  He had an open net to shoot on and barely missed wide.  The Eagles then established momentum as a defensive lapse by the Warriors allowed Emmaus to get a shot by Seth Bielenberg on a free kick in the 21st minute to put the Eagles up 1-0.

The bright spot of the half came in the 23rd minute as Masaki Ouchi crossed in a ball off of a free kick on the right flank.  Aedan Wilson connected off a Josh Tomlinson assist to put the Warriors on the board 1-1. Emmaus scored again in the 28th and the 33rd minute after lapses of giving up too much space and a bad give away.  The two teams went into the break with the score 3-1. “They controlled the first half,” Coach Nichols said. “Those defensive lapses and giveaways told the story of the half”

In the second half, the Warriors came out strong and were determined to get back into the game. Their energy would be depleted in the 57th minute as Emmaus scored to make it 4-1 Eagles. Takagi had another great opportunity to score late in the second half off another terrific pass from Tomlinson.  The shot went just wide. “We showed a lot of fight in the second half,” Coach Nichols said. “That was good to see. It was good to have a quality goal and good opportunities against a very good team.”

“As team leaders, we went into the game thinking this was going to be a tough game,” Captain Noah Wittenbach said. “We are quickly learning how to hold the defensive line.  Our defense is our strength and we have been showing that all year.  Now we are focusing on our offense.  I’m really proud of our team.  I never felt like we let up.  Coach told us that Calvary has a reputation to always play hard and to glorify God when we are on the field and I believe we held up our responsibility today.”

The team will not have much time for rest and recovery as they prepare to travel to Omaha, Nebraska on Monday to play Nebraska Christian College.