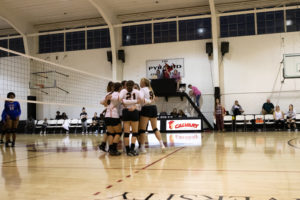 The Lady Warriors took on Manhattan Christian College Tuesday afternoon, and dropped the match 3-0. The Manhattan Thunder had a strong start to the game, taking early leads over the Warriors in the first two sets, and winning both sets. Although the Warriors only missed 5 serves altogether in the first two sets, the serves were not enough to put the Thunder out of system. “They were able to return our serves very well,” said Coach Ashley Spicer. “This put us in a defensive mindset. We were not able to attack well and keep them out of system. They do a great job of covering the entire court.” The Thunder took the first two sets 11-25.

The Warriors will next play Trinity Bible College at home on Friday.