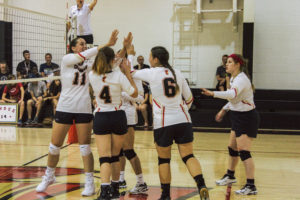 Calvary University Volleyball shut out Kansas Christian College in their home opener of the 2019 season. The Lady Warriors got off to a quick start taking the first set 25-12. “In the first we did a good job of swinging hard,” said Coach Ashley Spicer. “Going into the second set we wanted to improve on not relying on errors from the other team.”

Calvary University had an even stronger second set, with excellent performances from Anna Holloway and Lindee Wentworth. Anna Holloway led the way in hitting with 12 kills while Lindee Wentworth had 5 aces by the end of the night. “We were able to have a really excellent second set because of the aggressive mindset of the team,” said Coach Spicer. The Warriors took the second set 25-13.

Going into the third set, the Falcons were able to respond to the Warriors momentum by attacking more aggressively. The Warriors refused to let the Falcons come back, and finished the set 25-18, winning the match 3-0.  Jenny Her proved to be a difference maker from the back row with 9 digs. “I was really proud of the hustle and effort that the girls showed tonight,” said Coach Spicer. “All across the board every girl on the team was contributing to the win.”

The Warriors will next travel to Ankeny, Iowa to take on Faith Baptist Bible College on Friday.