Bears Down Warriors in Overtime 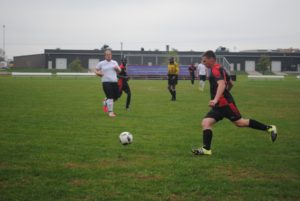 MOBERLY, MO – The sixth seeded Calvary University Men’s Soccer team (1-7-0) lost to third seeded Barclay College (7-3-0) in the first round of the Midwest Christian College Conference Tournament in overtime, by a final score of 3-2.

The first half was a defensive grind for both teams with neither the Bears nor the Warriors being able to find the back of the net. In the 30th minute of the first half, Barclay was able to win a penalty kick off a foul, but goalie Tyler Cheslik was able to block the shot on a diving save, and the teams were tied 0-0 at the break.

The second half started quickly with the Warriors’ Kameron Wiebe scoring a goal in the 48th minute off an assist by Mark Rodenberg. Soon after, Rodenberg was able to score another goal in the 56th minute, giving Calvary a 2-0 lead. The Bears rebounded quickly with their own goals in the 57th and 64th minutes respectively, tying the game at 2-2 and forcing the overtime.

In overtime, both teams were able to get in good positions to score, but were unsuccessful until the 98th minute where Barclay was able to score to win the game 3-2.

“I am very proud of our guys and the effort they put forth in today’s match!” said head coach Daniel Nichols. “I would say that it was our best full match that we played this year. While we fell just short of the win, I was happy to see how our guys responded. Our guys have grown a lot this year, not just as soccer players, but most importantly in their walk with the Lord, so I pray that we continue to do that in the remainder of the season.”

The Warriors will continue their tournament run tomorrow, October 21, against seventh seeded Central Christian College of the Bible, at 12:00 CST in Moberly, MO.