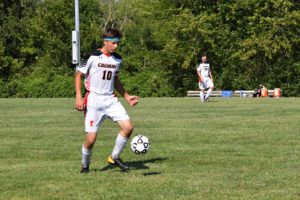 The Falcons scored two early goals and the Warriors couldn’t find the answer as Calvary dropped their third game Tuesday afternoon 1-4 in Overland Park “We took some good steps forward tonight,” Warriors Head Coach Daniel Nichols said. “Our guys didn’t get down on each other and we responded well.”

In the opening minutes, the Falcons came out strong as they used good passing to move into the attacking third. The Warriors defense was able to handle the pressure as they cleared out several chances early on but missed on two as the Falcons went up early 0-2 before the fourth minute.

The Warriors tried to claw their way back to tie the game and got one goal back in the 19th minute when Takuya Takagi was able to finish on a great assist from Aedan Wilson.  As the first half came to a close, the score remained 1-2.

In the second half, the Warriors came out with some urgency.  The score remained 1-2 throughout the first part of the second half.  As the second half began to close out the Falcons got two additional goals to finish the game with a 1-4 final score.

“We didn’t do quite what we needed to offensively,” Coach Nichols said. “But we did some good things tonight. We stayed mentally engaged on defense and our effort was consistent.”  “Seth Bielenberg had a terrific game in the goal for us as he had 11 saves.  Several were very key ones.”  “Aedan and Tak responded great offensively and gave us a chance to put points on the board.”  “Wade and Masaki were both playing Center Back and did a fabulous job of communicating tonight.”

Next up, the team will be on the road Saturday as they travel to Ankeny, IA for a matchup with Faith Baptist.