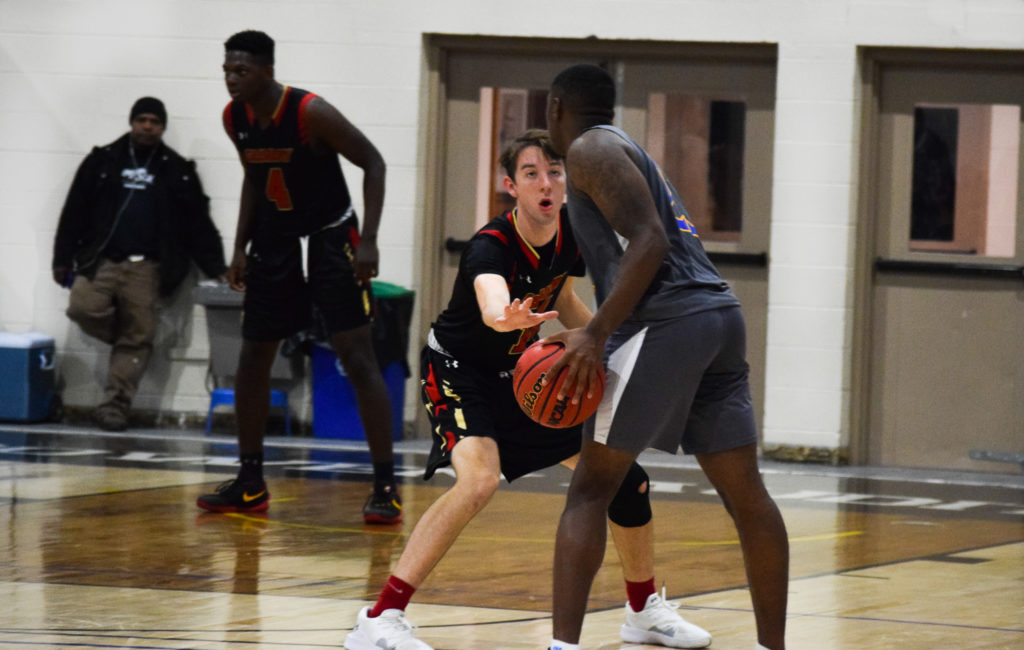 The Warriors picked up a big conference win Friday over Faith Baptist, in a battle between the 10th and 11th ranked teams in the country.

Calvary got off to a fast start grabbing an early 6-0 lead. Faith then went on a 9-0 run holding the Warriors scoreless for over four minutes. For the rest of the half, the game went back and forth, with both teams finding success at the offensive end and neither team able to gain more than a five point lead. After a pair of made Eagle free throws the Warriors went into halftime trailing 38-35.

Faith opened the second half with a pair of baskets to extend their lead to eight. Off a great pass from Jay Lems, Benjamin Jones created, and converted, an and-one opportunity to cut the lead back to five and momentarily stem the tide. Over the next eight minutes the Eagles matched the Warriors blow-for-blow and held a 59-52 lead at the 10 minute mark. With Calvary struggling to cut the lead to less than seven Cameron Bender knocked down three straight three-pointers, on back-to-back-to-back possessions, and evened the game at 61. The game remained tight until Lems hit a three to put the Warriors up 74-70 and provide some breathing room with three minutes left. The rest of the game became a free throw shooting contest won by the Warriors, who were 19-21 from the line on the night, as Calvary pulled out the 83-78 win.

After the game head coach Matt Sanders called Bender “the player of the game” as he made 5 of CU’s 6 threes and put the Warriors back in the game with his shooting in the second half.

Faith was the 10th ranked team in the country and played like it according to Sanders who had nothing but good things to say about the opponent, ”Give credit to Brian Fincham and his staff at Faith. They were well coached, tough, big, and physical. They just didn’t shoot it well and I like to think we had something to do with that, give them a lot of credit they caused us a lot of trouble.”

Unruh led the scoring for the Warriors with a game high 29 points including going 13-14 from the free throw line, adding 6 rebounds and assists. Green had 21 points to go along with 9 boards and 6 blocks. Bender went 5-7 from behind the arc and had 15.

With their first conference victory the Warriors improve to 8-6 on the season. Up next is Emmaus in Dubuque, IA on January 18.