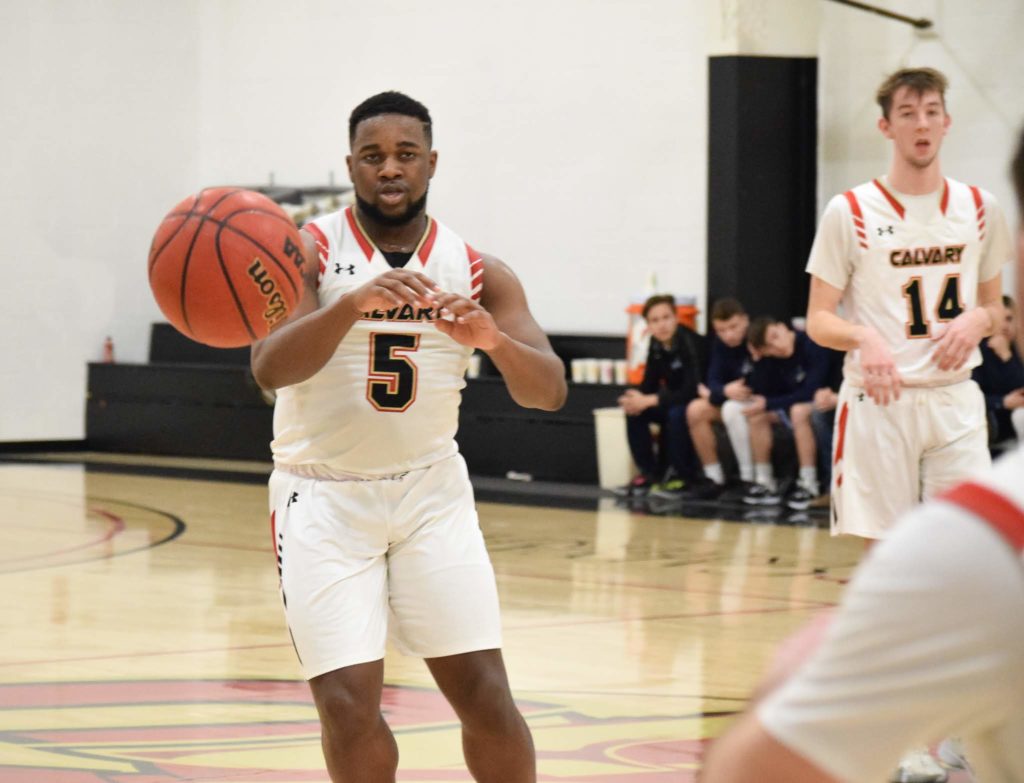 Calvary started fairly well grabbing an early four point lead, but the Lions went on an 8-0 run to take a 9-5 lead four minutes into the game. The Warriors fought back though and held 22-17 lead halfway through the half. From there the teams battled back and forth with Trinity regaining the lead with five minutes to play in the half 35-30. Calvary played well for the rest of the half and went to the locker room trailing by just four, 45-41.

The Lions opened the second half knocking down a pair threes and extending the lead, but Calvary was able to close the gap to just two. Until another Trinity three again stretched the lead to six. That was the story of the second half as every time the Warriors would cut into the deficit and appeared to be going on a run Trinity would hit a three to retake the momentum. With just under 15 minutes left Calvary trailed 62-53. The teams traded baskets over the next five minutes, but the Warriors found themselves down by 11 with ten minutes left. Calvary didn’t quit though and with four minutes left in the game had cut the Lions’ lead to five, but another Trinity three again stole the momentum from the Warriors. Despite their best efforts the Warriors never pulled any closer eventually losing the game 95-84.

As their name would suggest Trinity had a great night from beyond the three point line, routinely knocking down shots with a hand in their face. The Lions hit 15 threes and shot an other-worldly 56% from beyond the arc. Calvary played well in the game otherwise, shooting 43% from the field,  93% from the free throw line, and out-rebounding the Lions 36-26. The Warriors also assisted on half of their shots, while only turning the ball over five times.

After the game head coach Matt Sanders was complimentary of both Trinity and his Warriors, while also being critical of himself, “We ran in to a buzz saw tonight. They shot lights out. We definitely gave it our best, and our guys played their hearts out. But for the second time this season I coached an awful game. They played so hard and I didn’t make the necessary adjustments.”

Sanders also looked back on the season saying, “It was an amazing run, and one I will never forget. I am so grateful for each of these young men, what they stand for, and how they love Jesus and each other. I am especially grateful for my seniors, Zeb Green, Jay Lems, and Tim Marchbanks. What an amazing bar they have set for our program and school. We will sorely miss them and their leadership.”

Ques Harris led the Warriors with 25 points and 7 rebounds. Braydon Unruh added 20 points. Zeb Green and Cam Bender had 11 points each and 7 and 5 rebounds respectively. Benjamin Jones also had 10 points.

Logan Klitzke led the Lions with a game high 31 points.