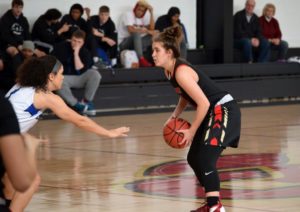 The Calvary University Women’s Basketball team opened their season with a 72-34 win over Union College. “I am really proud of how every single girl worked together tonight,” said forward Lynzee Faulkner. “We were able to really come together and play as one unit which really helped us pull out such a strong win.” Calvary University had a slow start to the game offensively, finishing the first quarter with 14 points. “With it being the first game of the season, we had to work through some nervousness before we could find our rhythm offensively,” said Coach Tressa Shoemaker. Despite a slow offensive start, the Warriors were relentless on the defensive end, holding Union to just 6 points in the first quarter, and finishing the first half with 13 steals. The Calvary Warriors were able to find their rhythm offensively, going on a 19-7 run to finish the first half 20 point lead.

Calvary carried their momentum into the second half by continuing to create open looks with ball movement, and moving the ball up the court well. The Lady Warriors also showed how strong they were defensively, holding Union to just 34 points for the game. “I am proud of the girls in how they executed their offense and played as a team. They are already taking ownership in how to improve for the next game,” said Coach Shoemaker.

Taylor Hunter led the team in scoring, finishing the game with 31 points. Hannah Sorensen added 12 of her own and Avery Kornstad finished with 9 points. Anna Davis led the way in in rebounding, finishing with 12 rebounds and 8 points for the night. Calvary University Women’s basketball will next play in the Allen County Classic tournament this Friday in Topeka, Kansas.