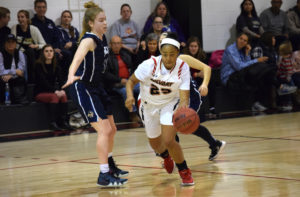 The Lady Warriors basketball team continued their winning ways on Tuesday night as the team defeated Kansas Christian College 53-48 to capture their third victory in a row. Anna Holloway and Anna Davis powered the Warriors. Holloway contributed 18 points and 13 rebounds with Anna Davis adding 15 points and 20 rebounds as the team improved their record to 3-1 on the season.

The Warriors came into the game after a great test and victory vs. Providence University College on Saturday. The team was determined to continue taking steps forward before taking a small break for Thanksgiving as they took the court in Overland Park only 45 minutes from home.

Calvary held Kansas Christian scoreless in the first quarter and gained a 17 point early lead. The Falcons made a 23 point run with outstanding pressure in the second half and at one time went up by as many as ten points. Calvary kept their poise and had a terrific fourth quarter. They came back with their own 29-9 scoring run to close out the game and get the 53-48 win.

“I’m really proud of how we played tonight,” Warrior forward Bam Manson said.  “I’m especially proud of how nobody gave up when we were down and how we were able to fight through for the win.”

“There are a lot of things we can take and improve on as they flipped the momentum on us and got us out of rhythm.  We realize that we just won a game against a quality opponent and are grateful,” Warrior Coach Tressa Shoemaker said.

“We were really strong in the first half,” Warrior guard Shalom Sutcliff said. “It was good to see us finish after falling short in the 3rd quarter.”

With the win, the Warriors improve to 3-1 on the season. Next up, the Warriors will be on the road in Hot Springs, Arkansas on November 27 for a matchup with Champion Christian College.