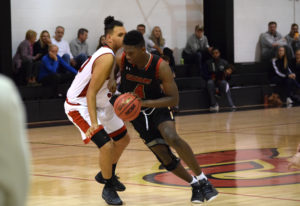 Calvary University Men’s Basketball finished their home opener with a 94-79 win over Union College. “I’m really proud of the guys,” said Senior Zeb Green. “They really fought well from start to finish.” The Warriors started out the game strong, gaining an early 10 point lead over Union. “We had a great start to the game,” said Coach Matt Sanders. “Great defense as well as timely shots really contributed to our fast start.” The Calvary continued to play well throughout the first half, going into halftime with a 44-30 lead.

The Warriors started out the second half with excellent defense, forcing Union to turn the ball over, leading to transition lay ups and open threes on the other end. “We have been working really hard in practice on our transition offense and it really paid off in the second half,” said Coach Sanders. Union refused to go away, however, and continued to make runs at Calvary in the second half. But with relentless defense, Calvary University was able to hold off Union. “We really came together as a team to stop Union’s runs.” said forward Ben Jones. With strong defense proving to be the difference, Calvary University was able to come out with the 15 point victory over Union College.

The depth of the Calvary Warriors  really showed on the court with 5 players finishing in double figures. Ben Jones finished the night with 20 points, and Jax Bell gave a huge lift from the bench with 12 points of his own. Zeb Green contributed 16 points as well as 12 rebounds, while Braydon Unruh and Jay Lems gave the Warriors the edge over Union with a combined 24 points. “Moving forward, we are going to take it one game at a time,’ said Coach Sanders. “We will be looking to improve our offensive execution and transition defense.” Calvary University Men’s basketball will next take the court Saturday at home against Baptist Bible College.