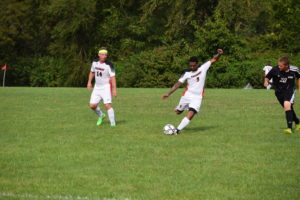 The Warriors started out the game aggressively on offense, with freshman Noah Wittenbach scoring a header off a cross from Mark Rodenberg in the 5th minute of the game.

They were able to stay in their offensive groove the rest of the first half with Mark Rodenberg scoring two goals in the 31st and 44th minutes. Freshman goalie Tyler Cheslik recorded 5 saves, and kept Central Christian from scoring in the entire first half.

The Saints came out of halftime fighting, and were able to score a goal three minutes into the second half, giving them momentum to score again in the 56th minute, making the score 3-2. Both teams continued to battle, but in spite of the heat, the Warriors were able to score a late goal via a header from Kameron Wiebe in the 89th minute to seal the victory.

“Yesterday’s match against the Central Christian College of the Bible Saints was Calvary’s best soccer game in quite some time, said coach Daniel Nichols. [The team] certainly put a great effort forward, and we praise the Lord for the success in which we had in the match. Soccer is so much more than wins and losses, and we are just really encouraged, I’m very encouraged, to see how the guys are growing spiritually, and in character. This year our theme is patience, and the Lord is certainly teaching us to be more patient, while waiting on him, but working hard at doing what He wants us to do while we wait on Him.”

The Warriors continue their season this Saturday, September 24, at home against Emmaus Bible College at 2:00 PM CST.