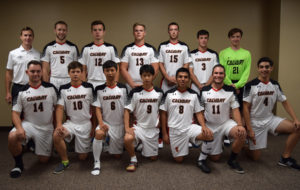 The season got underway on Friday for the Calvary men’s soccer team as they traveled to Lincoln, Nebraska for a matchup with Union College. Despite several bright spots throughout the game, the Warriors found themselves on the losing end of a 0-7 score.

In the opening minutes of the match, the two teams went back and forth with both trying to establish the pace of play.  Union scored their first goal two minutes in with a terrific shot from the 18’ mark.  They added to this score with a second tally in the 19th minute of the first half.

As the second half began, Union put the game out of reach four quick goals in 20 minutes to go up 0-6.  Still, Calvary was able to execute good combinations in play and had several good chances on frame, but the match ended with the Warriors falling 0-7.