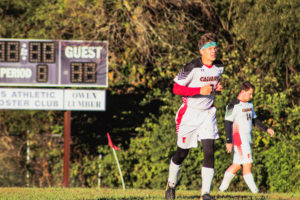 The Calvary University Warriors carried their momentum from Saturday’s win over Concordia Seminary into this afternoon’s match up against Union College. The entire game was very evenly matched, but the Warriors were able to come out on top with the 1-0 victory. “It was an all out team effort,” said Coach Daniel Nichols. “Our guys persevered, pressed hard, and really worked together to come out with the win.” Going into the game, Calvary University faced a major disadvantage, only having twelve healthy players versus Union’s twenty players. The Calvary Warriors did not let this daunt them, and fought hard from the opening moments of the game. Neither team was able to gain the upperhand in the first half, with both teams going into halftime scoreless.

At the start of the second half, both teams continued fighting to gain the upperhand. Union out shot Calvary, finishing the game with sixteen shots while the Calvary Warriors finished with six shots on goal. Calvary University put the ball into the back of the net when it counted most. In the 68th minute, Noah Wittenbach made a pass into space from the middle field, which was met by Clay Williams who made a fantastic shot into goal, putting the ball away just inside the post. This put the Calvary Warriors up 1-0, and although Union fought hard until the end, they were unable to find an answer for Calvary. “The three biggest keys to this win was our communication, passing, and our ball movement,” said Coach Nichols. This was the second win in a row for the Warriors, and showed the improvement of the team since they had first met Union College at the beginning of the season. “Today’s game was a very hard fought win. There is no doubt that Union is a skilled team. We really wanted it today and fought hard.” stated Team Captain Noah Wittenbach.  “I am so proud of our team for fighting hard till the end and staying locked in the entire time. I think the team did a great job at playing hard and giving God the glory.”

The Warriors will take the field again at home next Tuesday against Manhattan Christian College.