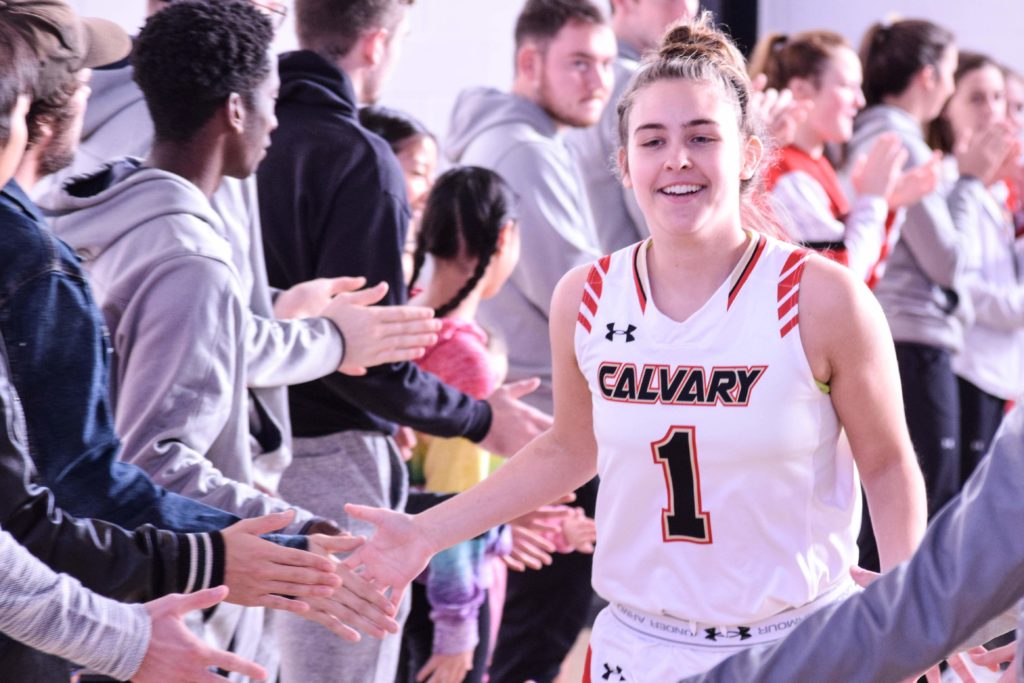 Taylor Hunter scored her 1,000th career point, as a strong first quarter from the Warriors led Calvary to an 85-78 win over Central Christian College of the Bible.

The Saints grabbed an early lead and held onto through the first five minutes. At the first quarter’s halfway mark Calvary trailed, 10-8. The Warriors though, would hold CCCB to just two points over the final four and a half minutes going on a 15-2 run to close out the first and lead, 23-14. The game was very evenly played after that, as  the teams matched each other over the next three quarters. However, the Warriors opened the second on an 11-0 run outscoring the Saints 26-2 over seven minutes of game time. Calvary extended their lead to 20, 34-14 with seven minutes to play in the first half. The Saints then went on a run of their own to cut the lead to five with three minutes left. Calvary was then able to push the lead back to nine and ended the first half up, 44-35.

In the third quarter the Saints were again able to chip away at the lead, cutting it to three halfway through the third quarter, 50-47. CCCB tied the game at 50 on their next possession. The Warriors then went on a 12-3 run to close out the third and take a nine point lead into the fourth quarter. Calvary was again able to extend their lead to 17 in the fourth. The Saints were able to close the game on a 14-5 run, but it was too little, too late as the Warriors picked up the 85-78 win.

Head coach Tressa Shoemaker said, “It was a great day to be a Warrior. We battled hard and were able to go on a couple of runs offensively against Central. The game was hard fought from start to finish as the Saints didn’t ever let up with their defensive pressure.” The Warriors handled the pressure well though shooting 45% from the field.

With the win Calvary, the four seed, advances to the regional semifinals to play the number one seed Providence University College at 2pm on Friday with a place in the championship game on the line.