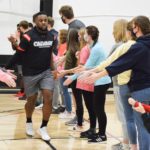 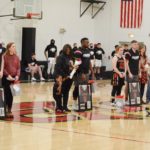 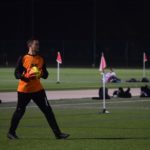 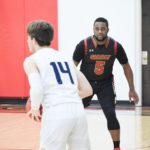 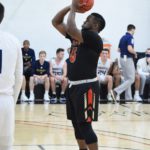 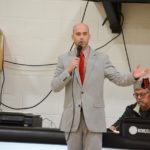 Braydon Unruh and Tobias Welling powered the Warriors with 26 and 16 points respectively as the team overcame a #6 seed and an even tougher opponent to defeat #1 seeded Trinity Bible College 80-72. With the win, the Warriors advance to their first NCCAA DII National Championship.” Our go to players played like they were players of the year tonight,” Warrior Head Coach Matt Sanders said. “We’ve been working since October for games like these and we had guys who really stepped up for us to get the win.”

Trinity Bible College beat the Warriors by thirty in December. They averaged over ninety points per game throughout the season so coming in Calvary knew they needed a fantastic game plan. They used a lot of shot clock on every possession to slow the game down, but offensively they executed the possessions they had with precision. Key minutes from Ike Maxwell and Peter Brandel put them over the top as the big three of Braydon Unruh, Ques Harris, and Tobias Welling continued their outstanding production on the season.  Defensively, the goal was to slow the game down and to keep the score in the 70’s. The team did a great job with this using their full court zone press back into multiple zones. The different zone looks and tough man to man kept Trinity off balance. Ques Harris was big on the glass with nine boards on the night.

“God has been so faithful,” Sanders said. “We talked today about what faith is from Hebrews 11:1, and how the evidence of faith is only seen in the hope of Jesus. All Glory truly goes to Him. We look forward to hanging this banner in The Pyramid and celebrating what actually took place here tonight. We continue to set new standards for Calvary Athletics and look forward with great anticipation to the National Tournament.
This is a tremendous accomplishment that is best told through the players themselves.

The rest of this article will be thoughts from the 2020-21 North Region Champions.

Ike Maxwell
“It just finally clicked. We’ve been so close to each other and we secretly knew we were capable of this. The scary part is that we still haven’t seen our best. Maybe there was a run or two tonight where it was close, but the best is yet to come. The greatest part about this is that these snippets of net and banner aren’t eternal, and every single person on this team understands that. We know that it is in the conversations and the way we go about things that glorify God. That banner isn’t anything but a filthy rag compared to the riches we will cast at the feet of Jesus. It’s not about whose name is in the stat book, It’s about whose name is written in the Lamb’s book.”

D’Marques Harris
“Today was a byproduct of a group of collective individuals coming together and moving as one cohesive unit. This is the Lord’s doing, and it is marvelous in our eyes!”

Braydon Unruh
“I am so proud of our team and all the work we have put in. I am also extremely grateful and humbled by God’s faithfulness. All glory goes to HIM!”

Zak Kirkman
“I would not want to play with any other group of brothers. Every single person on this team works with an attitude to please the Lord in everything they do. May God be glorified each time we step onto the court!”

Peter Brandel
“We play this game to worship Jesus as brothers in Christ. Today’s game was a reflection of all the hard work and sacrifice that was put in by each person on this team. We compete to win every game, but more importantly we compete to glorify God. Today we were able to do both. All for HIM!”

Coleson Voran
“There has been so much uncertainty this season with COVID that every game was a blessing. Seeing everyone go out and battle today, and now having the opportunity to compete at Nationals is overwhelming. It’s obvious God has been working.”

Tobias Welling
“Tonight, we made the decision that losing just wasn’t an option. We did this by believing in one another, loving one another, and never giving up on each other. This was only possible by remembering what Christ did for us. He never gives up on us, and He loves us so much that He died on the cross for our sins. As we play, we strive to remember this truth and show it to others with our words and our actions.”

Seth Hower
“Being able to just be a part of this team and cheering on the guys from the sideline as we battled was an absolute blessing. When the clock finally hit 0 it was an unbelievable feeling!”

Jamaal Smith
“I’ve never been a part of a team that has had this big of a positive impact on me. I am thankful and blessed to be here. We are truly a family. All praise to God!”

Joseph Morrow
“I’ve never played on a team with people that love each other like we do. We didn’t make this happen with one or two people. We all believed in each other from day one, even when things weren’t going our way. All Glory to God!”

Robby Bollinger
“What I witnessed today was unbelievably amazing. Seeing a group of guys come together and believe in each other while executing like we did was AWESOME!”

Jesse House
The Lord brought every person together to fulfill each of their roles and to shine for Him. All of it points back to Him. It was a blessing to do my part in taking stats and cheering on the team to lift them to a championship!”