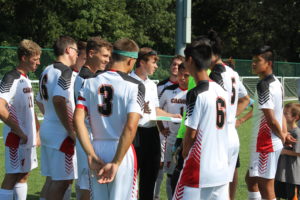 Calvary University Men’s Soccer went into Saturday’s game looking to win, and did just that coming out with a 3-0 victory against Concordia Seminary.  From the opening moments of the game, the Warriors showed the improvements that they had been working on in last weeks practices. “This week in practice we highlighted passing the ball out of pressure instead of dribbling into pressure,” said Coach Josh Henderson. “That definitely showed in today’s game.” “We had some good chemistry on our offense today,” stated Senior midfielder Masaki Ouchi. The Warriors took control of the ball from the start of the game, pressing the ball up the field. In the 4th minute, Clay Williams shot the ball into the back of the net off of an intercepted pass to put the Warriors up 1-0.

The Warriors continued to be relentless in their excellent ball movement from defense to offense to put themselves in scoring position. “Micah Wildasin made an impact on the game by pushing the ball up into the attack and supporting the attack,” said Coach Henderson. “Josh Tomlinson, Ian Montgomery, and Chris O’Daniels did a fantastic job in the middle of the field intercepting and distributing the ball as well.”  At the 26th minute, Calvary University increased the score once again. Clay Williams assisted Oscar Palafox who advanced the ball into the goal keeper box, and fired a shot into the upper 90. This put the Warriors up 2-0 heading into the half.

The Warriors carried their momentum into the second half, continuing their excellent ball movement and attacks. In the 60th minute, Oscar Palafox crossed the ball from the right flank to Clay Williams who had an impressive header into the goal. This put the Warriors up 3-0 over Concordia. By the end of the game, Ethan Zeeryp recorded his first clean sheet of the season with eight saves. The defense of the Warriors was also outstanding throughout the entire game, allowing the Warriors a final score of 3-0. “We were really excellent in their passing, communication, and movement off the ball,” said Head Coach Daniel Nichols. “It was encouraging to see our improvement on the field today.”

The Warriors will next be at home Tuesday afternoon against Union College.