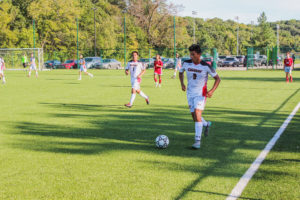 The Calvary University Men’s soccer took on NCCAA Division I opponent Ecclesia College Tuesday afternoon in Kansas City, MO. The speed and strength of Ecclesia showed as the Warriors came up short 8-1. Ecclesia scored in the 4th minute to take an early 1-0 lead. The Warriors almost tied up the game with a great shot from Oscar Palafox, but the shot went just above the crossbar. “We got off to a good start today, but made a few mistakes leading to Ecclesia goals,” said Coach Josh Henderson. Ecclesia made 5 more goals to head into the half with a 6-0 lead.

With adjustments at the half, the Warriors came out looking much stronger, only allowing Ecclesia two more goals in the second half. In the 55th minute, Oscar Palafox scored off an assist from Wade Smith, making it his 4th goal of the season. Calvary’s goalkeeper Ethan Zeeryp had an outstanding performance with 10 saves. “I’m proud of the guys for finishing the game strong and for making improvements throughout the game,” said Head Coach Daniel Nichols. The Warriors will face Ecclesia once again Saturday afternoon in Springdale, AR.