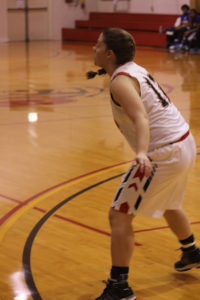 Against Barclay, both teams played even almost the entire game. It wasn’t until the second quarter that the Lady Warriors began to find some rhythm, gaining a 24-20 lead at halftime. In the second half of the game, Calvary continued slowly building their lead, going up by 15 in the fourth quarter, but ending the game with the win, 47-38

In the game against the Lady Eagles of Rhema Bible College, the Lady Warriors struggled offensively in the low scoring battle, shooting a meager 23% from the field and 14% from the three-point line. The first quarter was productive for the Lady Warriors, who got an early 18-2 lead. The final three quarters were rough with Calvary giving up 19 turnovers and only scoring 17 points.

The Lady Warriors were led in scoring by Rachelle Deaver who recorded a double double of 14 points and 13 rebounds. Rilee Walquist scored 8, and Shelby Young score 6 points with 2 blocks.

The Lady Warriors are back in action on Tuesday, January 31 at Manhattan Christian College.