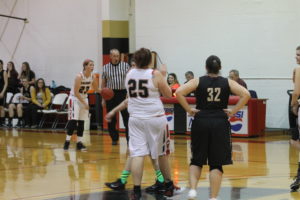 The Lady Warriors had no problems against the struggling Lady Eagles, even after losing Junior point guard, CJ Lewallen, in the first quarter to a knee injury, and junior Rachelle Deaver in the second half with a head injury. Rilee Walquist led the warriors in scoring with 21 points and 7 steals, and Rachelle Deaver contributed 9 points and 8 rebounds.

Statistically the Warriors were not very efficient, shooting only 27 percent from the field and nearly 31 percent from beyond the arc. However, they forced 28 turnovers and racked up 45 total rebounds, including 18 offensive boards, many of which led to points.

On Saturday, the Warrior Women struggled against the fast and efficient Emmaus Bible College Lady Eagles (12-5, 5-0) who are currently sitting at first place in the conference. It did not help that the Lady Warriors were still without starting point guard CJ Lewallen who was still out with a knee injury.

Rilee Walquist once again led the Warriors with 9 points and 8 rebounds. Rachelle Deaver and Ashley Spicer each contributed 4 points.