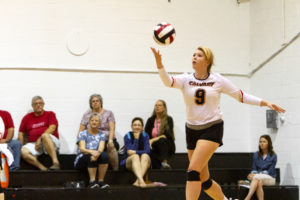 The Lady Warriors came out of a tri-match against Union College and Ozark Christian College with a win and a loss. In the first matchup of the evening, Calvary University faced Union College, coming out with a 3-0 win.  The Calvary Warriors got off to a slow start in the first two sets. Calvary University came out of the first set with a hitting percentage of 9%, as well as 14 service errors by the end of the game, allowing Union to stay within reach during the first two sets. “We were giving Union a lot of room with our errors in those first two sets,” stated Coach Ashley Spicer. Calvary University was able to overcome these struggles, edging out the win in the first two sets 25-20, and 25-22. In the third set, the Warriors were able to eliminate these mistakes and take control of the game. “The third set is where the girls really took control and found their rhythm, ” said Coach Spicer. “Once we cleaned up our errors we were able to take over the game. We spread our offense across the whole court utilizing each player and wearing out Union’s defense.” Calvary University finished the third set with an excellent 92 serving percentage and 36 hitting percentage as a team. Jenny Her led the way in defense with 17 digs while Leah Grady finished the game with a total of 9 kills. Both Tori and Kennedy had stellar performances with 12 and 13 assists, respectively. The Calvary Warriors came out of the third set 25-14 win, taking the match 3-0.

The Warriors next faced Ozark Christian College for the second time of the season. The Warriors were unable to repeat their five set victory from the last meeting between the two teams, instead dropping this match 3-1. The Warriors had a strong start to the game, winning the first set in a close 26-24 battle. “The girls really went at Ozark in that first set with some of the best volleyball that I’ve seen them play,” said Coach Spicer. The Lady Warriors were excellent in their serving in the first set, almost serving at 100% as a team. Kennedy Shelton contributed 3 aces and the Warriors finished the set with no serve receive errors. The Warriors carried their momentum from the first set into the second set, going at the Ambassadors with purpose. Midway through the second set, leading blocker Leah Grady went down with an injury, halting the Warriors momentum. The Warriors made adjustments to the front row, but were unable to finish out with a victory, dropping the set 25-14. The Warriors were unable to find their rhythm again, dropping the next two sets 28-26 and 25-20. “We had to change things up after losing our middle block,” said Coach Spicer. “I am so proud of how they responded to these changes and fought hard through adversity. We missed some key serves and in the end, Ozark was able to put the ball on the floor a few more times than we did. Our upperclassmen stepped up in defense in a huge way, ending with 22, 19, 13 and 11 digs from Anna, Jenny, Esther, and Tori.” The Lady Warriors did not let the match drop without a fight, ending the match with 9 aces, 6 from Kennedy Shelton and 13 kills from Anna Holloway with Esther Schwarze right behind with 10.

The Warriors will next play at home Friday against Faith Baptist Bible College.