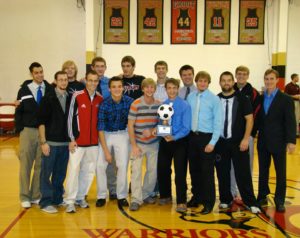 In November of 2012, the Calvary University Warriors won the ACCA National Championship.  This month marks the six-year anniversary to that accomplishment and we wanted to honor that team as November is beginning.  The men on this team set an incredible standard for the future of our department and we are so grateful for their legacy.  We praise God for each one of them as well as Coach Henderson!  Coach Daniel Nichols asked Ross Harris to write about the championship game.  The following paragraphs are written by captain Ross Harris.

On the trip over, I sat up front with Brian and prayed with him as we did before every match. We got off the bus and got ready for the match. I was normally silent, and worrying about and analyzing the other team for weaknesses, but for the first time, I found I was looking at our team only. I took in all the laughter and just enjoyed being with these other Christian brothers I had the pleasure of playing with at Calvary.  I loved them all, and apart from my Savior and my family, I loved nothing else more than these men I was able to serve with.

Being the captain of this team was one of the greatest joys of my life. Wearing the armband for the Warriors normally felt heavy, but I felt light as a feather that day. Warm-ups ended, and I remember looking each player in the eye. I told them, “We come from different walks of life, different backgrounds, different upbringings, different beliefs, but have been brought to the same school, on the same team, by the same Savior to win that third star.”  Our goal was to tell everyone God helped the same players who achieved the worst season in Calvary history turn things around and eventually end up winning the national championship two years later.  “Let’s do what we’ve been charged to do today. Let’s win this.”

We said “Rak Chazak” one last time. I smile fondly when I think that the match for me was quite unremarkable. I don’t think I registered an assist on any of the goals even. I had a front-row seat watching my brothers in Christ play the most beautiful match of the beautiful game that I’ve ever had the joy of playing. They were crisp, technical, and precise.

We went into halftime knotted up at 0-0, and down one player. A great irony occurred. Brian Binkley, the man who never stops running, the man who carried an ankle injury all season, finally lost the battle to his injury. He couldn’t run. We carried him off the field, and he was done. My heart broke, as he was a senior, and this would be his last game. He’d have to spend it on the sidelines.

I walked up to Brian and told him to take it easy. I told the other players to stay loose and get ready for the next half. Brian was grimacing on the bench, holding his ankle. I walked up to him, patted him on the back, and said, “Don’t worry. Just rest now. You’ve served your school well. We’ll carry you to the finish line.”

Steven Parkin went on to score the opening goal (and the first goal of his career), followed by Josh Henderson. Parkin then scored his second, and Josh Henderson sealed the deal. It was the greatest performance I’ve ever seen at Calvary on the day we needed it most. It was the complete game. We won 4-0. I remember looking at the clock and seeing the 0:00. I fell to my knees and sobbed. I promised Coach Krchmar we’d win a championship. I thought we’d never get it done, until the night before.

I called Coach Nichols on the bus immediately. All I remember saying to him was, “Look what He did!” The other players celebrated with him as well.   We had a great buffet for dinner and drove back to school.  I held the trophy close the whole way home. 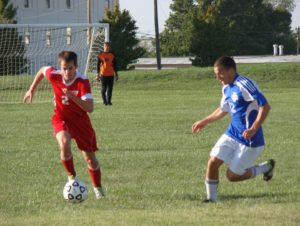 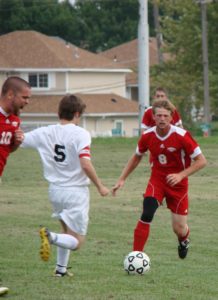 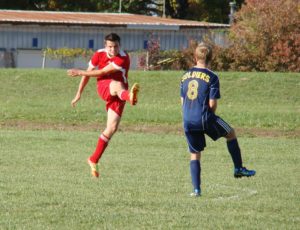 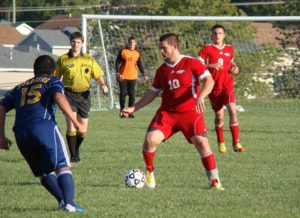 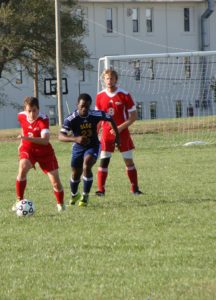 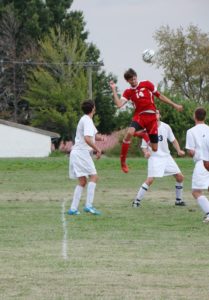 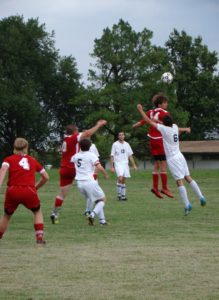 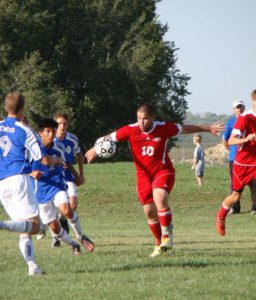 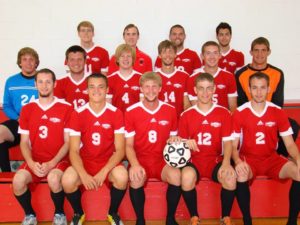 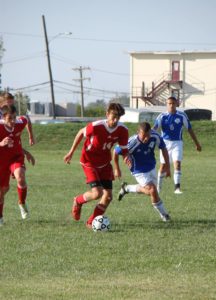