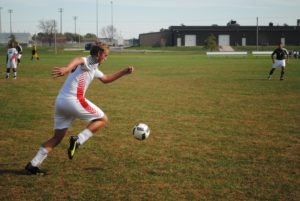 MOBERLY, MO – The Warrior Men’s Soccer Team (1-8-0) fell to a solid Central Christian College of the Bible team (3-11-0) in the consolation semi-final of the Midwest Christian College Conference Tournament, losing by a final score of 2-7.

The Saints stunned the Warriors early, scoring a goal in the first minute of the game. They continued their strong offensive attack scoring again in the 14th and 15th minutes, gaining an early 3-0 lead. The Warriors created several scoring opportunities, nearly scoring a goal in the 21st minute, but were stopped by the Saint’s strong defense, who was then able to score a goal on the other end in the same minute.

Calvary continued to fight despite the Saint’s early lead. Mark Rodenberg, assisted by Kameron Wiebe and Sam Her, scored a goal in the 41st minute, cutting the lead to 4-1 and giving some life to the Warriors. However, the Saints were not deterred, and scored again in the 44th minute, going into halftime with a comfortable 5-1 lead.

The Warriors defense picked up in the second half, but were not able to find a groove offensively to catch the Saint’s lead. Kameron Wiebe scored the Warrior’s only goal of the second half off an assist by Sam Her in the 74th minute. The Saints scored two more in the 70th and 87th minutes to give them the win 7-2.