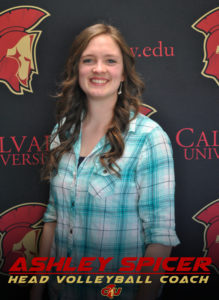 Calvary University Athletic Director, Jeanette Regier, is excited to announce the hiring of Ashley Spicer as the head coach for the women’s volleyball team.  Spicer, a four-year player and one-year assistant for the Warriors, will take over a program that went 10-11 last year including a trip to the ACCA National Championship. In addition to Head Volleyball Coach, she will serve as Administrative Assistant to the COO/CFO of Calvary University.

A native of Manila, Philippines, Coach Spicer will graduate with her B.S. in Elementary Education from Calvary University this May.  Though much of her education was focused on elementary students, her education and experience at Calvary in various leadership positions and particularly as an assistant coach will help her to be successful in her new position. “The strategies I have learned and the passion I have built throughout my education that prepared me for the classroom are the same strategies I use and passion I have for coaching,” says Spicer. “God has gifted me as a teacher, and the gymnasium is simply a different room in which I can teach. I am merely using a different tool to impact student lives for the kingdom of God.”

Building off of a successful program will be a major advantage for Spicer’s first year with all the players from last year’s squad returning, including four seniors. She says that the main thing she is not changing is the unity of the team. “The players care deeply for one another and look out for each other on and off the court. This is something that is always intentionally addressed by coaches and players alike every season, and I want to continue this as well as take this to the next level throughout the entire university.

Coach Spicer’s leadership style is one that players will come to respect greatly as she transitions into her new role. “My age provides me the ability to demonstrate for my players as well as condition with them,” she says. “Actions speak louder than words.  If I can model for them skills and health or physical habits that will make them successful, players are more apt to want to follow my lead. This will also help them to develop mutual trust and respect since I am not simply dictating what they should do.”

As Spicer continues to build the volleyball program at Calvary, her greatest desire is to encourage her players to pursue excellence in everything they do, giving glory to God in all things.