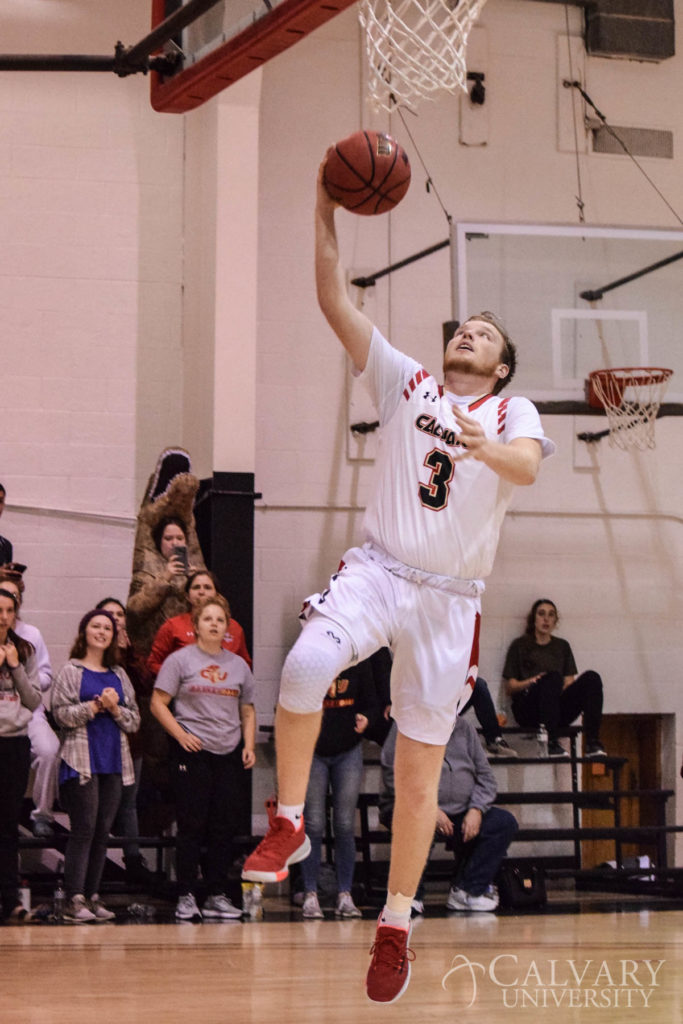 Calvary played well, but was unable to pick up a win on the road losing to Manhattan 92-79.

The Warriors played what head coach Matt Sanders called the “best game of the semester for 33 minutes,” and the Warriors trailed by only four at halftime. However, turnover struggles plagued Calvary over the final seven minutes of the game as it got away from the Warriors. Turnovers were the story and the difference in this one. Over the course of the game Calvary turned the ball over 23 times, credit the Thunder for getting 17 steals and only turning the ball over 6 times themselves, limiting the Warriors’ fast break and easy scoring opportunities.

Both teams shot the ball well, with Calvary actually outshooting the Thunder 44% to 43% from the field and 45% to 42% from behind the three-point line. The game was closely contested for most of the night and the lead changed hands 14 times. But the inability to hold onto the ball over the final seven minutes led to a cold stretch for the Warriors and allowed Manhattan to stretch their lead to 18 with two minutes to play. CU was able to cut into the lead a little, but it wasn’t enough in the end.

Despite the loss the Coach Sanders said, “We really played a great game and definitely are improving. We are starting to regain the confidence and toughness that we had back in the first semester. We got huge minutes from AJ Bordallo, Cam Bender, and Benjamin Jones. Zeb Green was also solid with another double-double.”

With that double-double Green led the Warriors in both points and rebounds with 17 and 11 respectively. Braydon Unruh had 16 points and Jones added 15.

Payton Stephens led the Thunder with a game high 21 points.

With the loss Calvary drops to 10-11 on the season and will look to get back on track on Friday with another conference game at Barclay College.