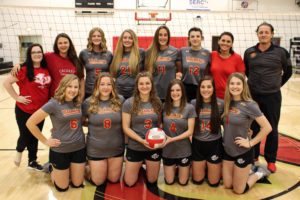 KANSAS CITY, MO – Last night the Warriors Volleyball team went up against Cottey College for the first time this year and unfortunately, they were defeated. Set one was a significant struggle with errors including serve receive, double contacts, and net violations that all worked to give Cottey points. The second set went a little smoother and the girls got themselves into a confident rhythm.  Sadly however, it was not enough to overcome their problems with serving and they were again beaten. The final set was perhaps the biggest turning point of the night. The girls overcame their nerves and played evenly with Cottey with Basia Nesbett-Tucker scoring a point that briefly pushed the Warriors one point ahead. At the end, unfortunately a free ball ended up going to waste as the team failed to attack and gave the ball back to Cottey on set point.  Cottey took advantage, got a kill, and finished the set out with a couple good serves and swings. The last set was a remarkable step towards improvement, but the Warriors still have a lot to work on if they want to be able to compete with NAIA teams like Cottey. “We proved to ourselves that we could do so,” said Coach Johnson. “When we see them in October, we expect an even better outcome”. Cottey won in three straight sets with scores of 25-17, 25-14, and 26-24.

On Friday September 10, the Warriors will be facing Barclay College at Home at 2 p.m.