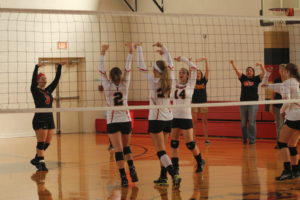 In November of 2011, the Calvary Bible College volleyball team placed second in the Association of Christian College Athletics National Tournament for the second year in a row. Since then, they have not placed in the tournament. This year, the Warriors are back and looking to make another successful run.

“It’s a great privilege for us to be able to attend because we haven’t had the record that’s been necessary for us to play in the tournament for at least three years now, so the girls have worked really hard to be able to get to this point, and they should feel really great about the opportunity to go and play with some fantastic teams.” Said head coach Jeanette Regier.

The Warriors started out this season rolling, going 7-1 overall, and 3-1 in conference play with their only loss to then #5 Manhattan Christian College. Injuries soon started to take their toll on the team, first with Freshman Arianna Erixson going out with a leg injury, and later a concussion; and then Sophomore Lisa Rensberger was placed on injured reserve due to a broken finger.

After the injuries, Calvary struggled to find their rhythm again, but turned things around towards the end of the season, and will enter the tournament with a 10-9 record

In terms of injuries, “Arianna is out for the tournament, her season is going to be finished because of her concussion. She is still not back to one hundred percent yet, so the doctor says it is best for her to stay out. As far as with Lisa, she just got cleared to be able to play in the tournament so she will be a big help this weekend.”

This tournament brings some new challenges for the Warriors. “We are playing teams from Texas, and teams from Tennessee, so we are trying to find film on them” said Coach Regier. “We are doing scouting reports on each of those teams to try to help us know what to do against them, know what they like to do offensively and defensively, so we can adjust accordingly.”

Their first matchup will be Thursday, November 10 at 3:45 against Arlington Baptist College out of Arlington, Texas. The Patriots enter the tournament as the 2 seed with a 15-14 record.

The ACCA Tournament will be held on the campus of Ozark Christian College in Joplin, MO.