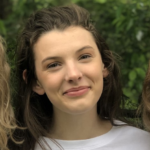 Calvary University volleyball is excited to announce our newest signee for the 2020-2021 season, Hannah Davidson. Davidson hails from Front Royal, VA. Hannah is a 2019 home school graduate. Hannah began playing volleyball at the age of 14. Hannah is an outside hitter and defensive specialist who brings dynamic ability with her to Calvary. Hannah’s awards include being named MAX-Preps AVCA High School player of the week for State of Virginia. She was also named to the All-American team her sophomore year. Hannah also played for Kevin Coffman at Two Rivers Volleyball Club where she earned MVP honors numerous times. She has taken a unique route to Calvary. After graduation in 2019, Hannah chose to take a gap year. During her gap year she served numerous ministries within her church, including but not limited to the worship team and coffee shop ministry. Coach Johnson learned of Hannah’s ability and availability through a friend (and fellow coach) Kelly Braun-Duin of Winchester, VA.

Hannah plans to study worship arts. She hopes to fulfill a dream of being a worship leader in the near future. When asked about Calvary, Hannah shared, “I had never even heard of Calvary until coach Josh gave me a call asking if I would be interested in playing, I was very hesitant, originally I planned on going to a Bible college. After much thought and prayer I decided to pursue CU, turns out to be the best of both worlds as they take the Word of God very seriously, I can earn my degree and play sports!” Hannah, about her coming to know Jesus recalls, “I grew up in a Christian home, when I was about 8 years old I decided to accept Jesus as my Savior, I have been serving Him ever since.” We are excited to bring Hannah into the fold trusting that the Lord will grow Hannah and each of the young women on the team through her presence. We celebrate together with Hannah and her parents, Gill and Amy Davidson. Please join us in welcoming Hannah!