Warriors Battle to Get Important Win in Joplin 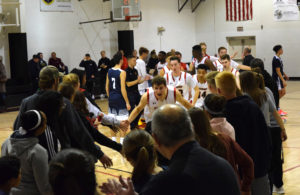 The Warriors played their 3rd straight road test of the 2018-19 season, and the team used toughness, energy, and desire to battle to a 99-89 win over Ozark Christian College on Tuesday night. The Warriors were coming off a 75-57 win over Union College on Saturday night in which the team played quite well defensively. Tonight they wanted to come out and set the tone offensively as well.

“It’s always tough to play in Joplin,” Warriors coach Matt Sanders said. “Ozark did a great job of doing what they do best. They have great shooters and kept hanging around the whole game. We knew they would make a run.  They really scrapped and fought hard. Anytime you play on the road you have to respect your opponent. We did a good job of holding on for the win.”

“We stood together tonight,” said forward Jax Bell. “Each person knew their role and executed it fully.”

The Warriors weren’t about to back down going into Joplin to face the defending champions of the MCCC.  Braydon Unruh had 25 points while going 7/9 from beyond the arc to lead the Warriors on the night. Zeb Green and Ques Harris were both huge on the glass as they each pulled down eight boards for the game. Ques finished with 20 points and Zeb added 16.  The fourth double-figure scorer on the night was guard Jay Lems who finished with 15 points while going a perfect 4-4 from the line.

With the win, the Warriors are now at 4-4.  Next up, the Warriors will travel to Clarksville, TN to battle Austin Peay University in an exhibition game on December 8.