Warriors Bounce Back with 85-78 Win 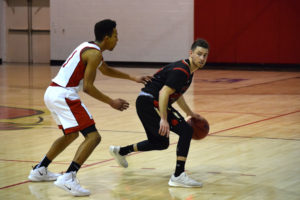 “We made them take some really tough shots in the second half while holding them to 35 points,” Coach Matt Sanders said. “They made a run at us to take the lead with eight minutes to go. After that timeout at the eight minute mark our defense was really good.” Providence shot 41% from the field for the game. Jay Lems, Zak Kirkman, Braydon Unruh, and Zeb Green all made critical free-throws down the stretch to preserve this victory for us today.”

“We learned a lot about ourselves”, said Sanders. “We need to continue to get better at sharing the basketball offensively. We need to make the extra pass and get easier shots. We gave up some critical offensive rebounds in the second half. We must improve that. We are looking forward to another chance at improving and seeing what this team can do next Tuesday as we play Kansas Christian College. They are athletic and shoot the three extremely well.”

The Warriors were led offensively by Jay Lems. He was 6-9 from behind the arc. Zeb Green contributed a double-double with 20 points and 10 rebounds. Braydon Unruh was just short of a triple-double with 11 points, 7 rebounds, and 7 assists.

“We played hard today,” said guard Zak Kirkman. “We gave up several runs throughout the game, especially from the three point line, but we stepped it up defensively to maintain our lead down the stretch. Jay Lems hit a huge shot for us with 1:10 to go that really helped seal the game!”

The Warriors move to 2-2 on the season with the victory and will have a short Thanksgiving break after their Tuesday matchup in Overland Park.