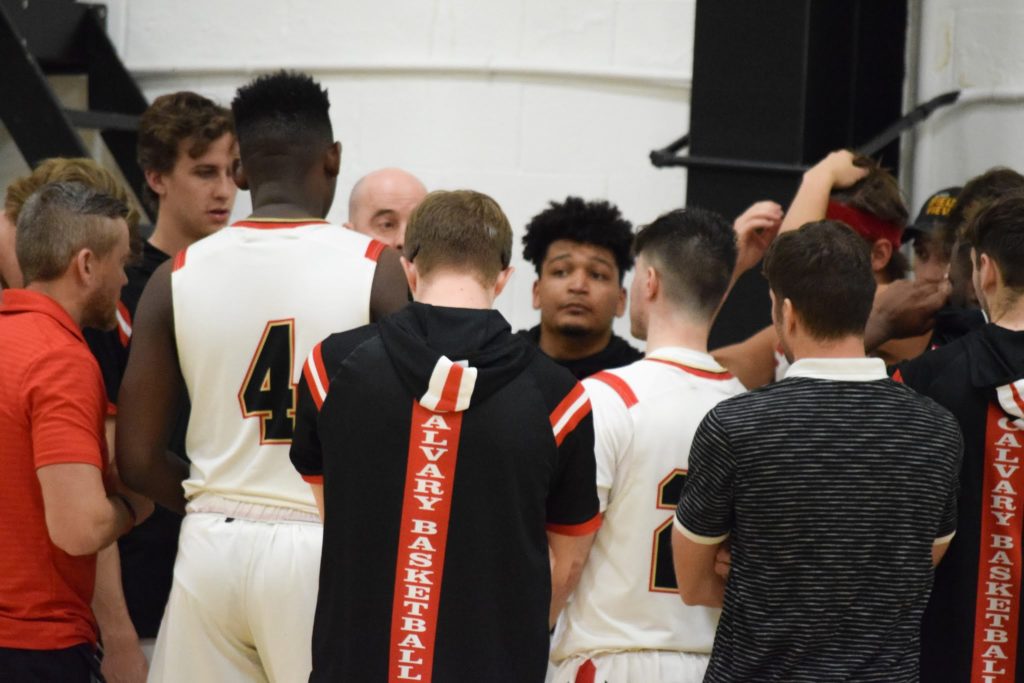 Calvary lost an extremely close conference championship game against Faith Baptist, 61-60, after the Eagles knocked down a free throw with one second remaining.

The Warriors opened the game playing extremely well defensively holding the Eagles scoreless for the first six and a half minutes of the game. Faith then knocked down a three, but the Warriors answered right back and led 13-3 with 13 minutes left in the first half. The Eagles were able to string some baskets together and cut the lead to 1 before Calvary went on a 9-0 run and were back up by 10 at the five minute mark. The Warriors were able to hold Faith scoreless over the final two and a half minutes of the half and went into the locker room up 32-19.

Calvary picked up in the second half right where they let off as Zeb Green converted an old-fashioned three point play extending the lead to 16. The Eagles though refused to go quietly going on a 15-2 run and cutting the lead to 3, 37-34, with 15 minutes left in the game. With 13 minutes left Faith tied the game and with ten and a half minutes left the Eagles grabbed their first lead 43-42. The game was evenly matched the rest of the way as the teams battled back and forth matching each other blow for blow, with five minutes to play Calvary led 51-47. With two minutes left in the game the lead was seven for the Warriors, after a Jay Lems three. But Faith would hold Calvary without a field goal for the rest of the game and scoreless over the final 1:45. With a minute left the Warriors poked the ball loose at Faith’s offensive end, but the ball bounced right to an Eagle who knocked down a three to tie the game at 60. Calvary had some good looks at the offensive end, but couldn’t convert and Faith gained possession out of bounds with 11 seconds remaining. The Eagles then took the ball the length of the court and missed a fadeaway jumper with one second left, but a foul was called prior to the shot, giving Faith a one-and-one opportunity. The Eagles knocked down the first free throw, and missed the second, squeaking by Calvary, 61-60.

The Warriors were outscored 42-28 in the second half and were unable to hold on to the lead gained in the first half. Faith did a good job controlling the boards, out rebounding Calvary 33-21 while also limiting the Warriors to just 26% shooting behind the three point line.

Head coach Matt Sanders kept things in perspective after the game, “Our team did what we all hoped for at the end of each season, began to peak at the right time. We really gained confidence as the season ended, and it showed in this tournament. We have great senior leaders, who gave their everything for God’s glory, each of their teammates, and our school. I am so blessed to have been apart of such an amazing run. Games like that are so hard to swallow, but we know that we ultimately play for the glory and honor of our Lord and Savior.” He also expressed gratitude for the chance to play in the championship game saying, “God shows us so much mercy and grace, we are incredibly grateful for the opportunity to have played in that game for the first time in 28 years.”

Braydon Unruh led the Warriors with 16 points and 5 rebounds. Zeb Green added 14 points and 5 boards and Benjamin Jones had 12 and 4.

Nathan Keck led the Eagles with game-highs 19 points and 8 rebounds.

Calvary is the Midwest Christian College Conference runners-up and will be the number two seed in the NCCAA North Regional Tournament at Trinity Bible College. The Warriors will play the seventh seeded Oak Hills Christian College on Thursday at 4pm.