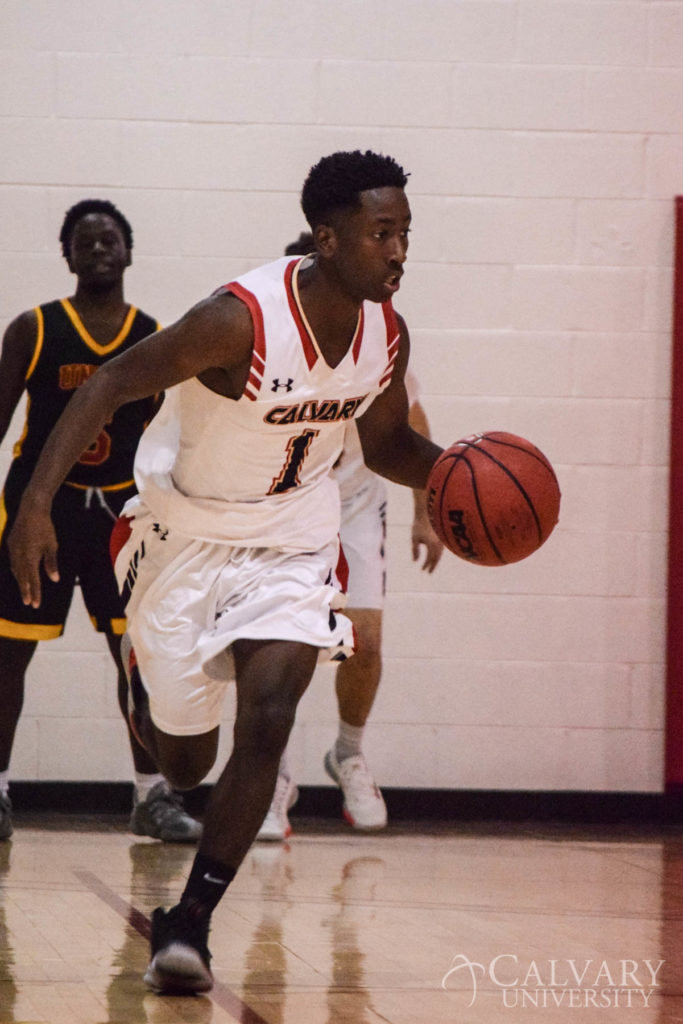 Behind great shooting Calvary was able to erase a 15 point deficit and pick up a conference victory on the road, 84-79.

The Bears opened the scoring in this one, but Calvary was able to match the pace of Barclay and six minutes into the game trailed by only three, 10-7. The Warriors then cooled off offensively and it seemed the Bears couldn’t miss, as they extended the lead to 12 halfway through the first half. Calvary was able to stem the tide over the next few minutes, but with under three minutes left Barclay held a 15 point advantage. The Warriors ended the half on a bit of a run, but headed to the locker room trailing 42-31.

Calvary opened the second half scoring, and quickly had cut the Bears lead to just five. Barclay was able to hold off the Warriors and pushed the lead back to nine with 14 minutes left in the game. Then the Calvary offense came alive and in just over a minute had cut the lead down to two, 50-48. From here both teams went back and forth with neither able to gain a real advantage. With 10 minutes left, a Braydon Unruh three tied the game at 57. The teams then traded baskets and the Warriors again found themselves trailing by two until Cam Bender knocked down back-to-back threes to give Calvary 65-61 lead, their first of the game. The teams were evenly matched from there as every time Barclay would tie the game the Warriors would knock down a three to retake the lead, only to be matched at the other end by the Bears. A pair of Barclay free throws re-tied the game with under a minute to play, before Unruh made the most of an and-1 opportunity, collecting all three points, to give Calvary the lead for good. Ques Harris then connected on both halves of a 1-and-1, to ice the 84-79 victory.

Head coach Matt Sanders called the game “an incredible second half effort.” Saying, “We played fantastic team ball and defensively we were excellent in the second half. We got huge nights from Cam Bender and Ques Harris, while Braydon Unruh and Zeb Green did what they continue to do. It was a big time conference win on the road.”

The Warriors as a team shot 45% from the field and 44% from three point range. Unruh and Bender were especially dialed in from deep as they connected on five and six threes respectively. The Warriors also assisted on 22 of their 33 makes and held Barclay to just 36% shooting in the second half.

Unruh led Calvary with 26 points, he also pulled in 9 rebounds. In his first collegiate start, Bender had 20 points and 6 rebounds. Harris added 13 points, and Green had a game high 15 rebounds, while also adding 10 points, giving him yet another double-double.

With the win the Warriors improve to 11-11 on the season, and 3-4 in conference play. Calvary is back in action at Ozark Christian College on Tuesday night.