The first set was a great one for the Warriors as everything was clicking on all cylinders.  Calvary was passing and serving well to take the early one set lead.  After falling behind 13-18 in set two, the Warriors settled into a groove and started making runs that eventually turned into a 26-24 victory.  The final set looked to be all Warriors, who started strong, but the Patriots drew even and made it interesting with six straight points before Calvary was able to finish it off.

“The girls played well tonight against a solid BBC team,” said Head Coach Jeanette Regier. “It was a team effort. We did not break down in the 2nd when they took the lead, which is a goal we always strive for.”  Tasha Krahn led the attack with seven kills.  Kaela Gingrich and Lisa Rensberger each added five kills. Paige Specht contributed 19 digs.  Calvary is back in action next week when they go on the road to Ottawa University.  The Patriots drop to 0-1. 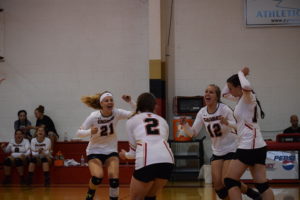