Warriors Make a Win at Home

KANSAS CITY, MISSOURI – The Warrior Volleyball Team managed to win the Saturday’s matchup against Ozark Christian College. Both teams served inconsistently with too many unforced errors. Calvary was able to separate themselves because of a stronger front-line performance.  Their hitters, led by Leah Grady, Elle Davis, and Haley Arneson outplayed the Ozark front line.  Ozark had a lot of unforced errors from their hitters which let Calvary take advantage and go on to win the match.   Haley Arneson had a terrific all-around match with ten digs, three ace serves and a strong serve that won twenty points on the day for CU.  The teams started out each taking a set.  As they entered set three, Calvary took over and wasn’t going to lose again .  The Warriors won in four sets 3-1. 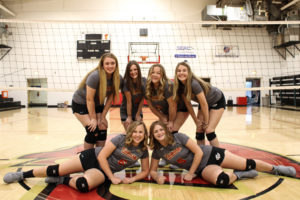 The Warriors will stay home when they go up against Cottey College at 6:00 p.m. September 7.