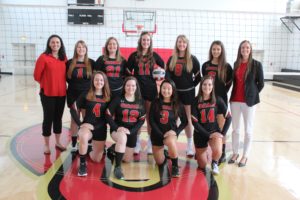 “I am proud of how my team responded and played hard to the finish,” Warrior Head Coach Ashley Spicer said. “It was a great day for us to learn and improve. It took a little time for our new players to adjust to the speed of the game at this level, but as the matches moved forward their comfort level improved as well.”

In the first match against NCU, Kennedy Shelton and Esther Schwarze both gave the Warriors huge momentum swings with serving runs.  Great serving made each of the sets close, but NCU edged CU out in the fourth set 1-3.

In the match against Trinity, the Warriors came out slow.  Serve receive was problematic at the start of the match, but some significant improvement was seen in serve receive production and percentage as the sets moved forward.  “Tori Veltkamp and Anna Holloway both had some terrific hustle plays in this match that set the tone for us defensively”, Spicer stated.  “We will use these types of plays to continue to define who we will become as the season unfolds.”

“We played against some good teams today,” Spicer said. “We hope we can compete at this level by the end of our season.”