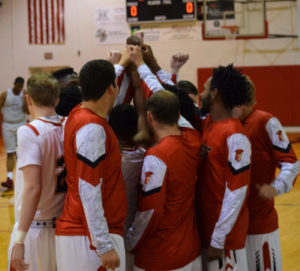 KANSAS CITY, MO – January 24, 2017 – The Calvary University Warriors swept the Ozark Christian College Ambassadors in the regular season by winning Tuesday night at home.  Calvary won 67-48 in the ladies game and 86-72 in the men’s game.

The Lady Warriors started slow offensively early in their game, before Rilee Walquist and Rachelle Deaver started getting hot in the second quarter, giving them a 20-point lead going into halftime. The offensive steamroller continued rolling for the Lady Warriors who went up by as many as 29 points in the third quarter. Ozark continued fighting, clawing their way back to within 17 before the final buzzer sounded.

After a three-game losing streak, the men were hungry for a win. After Calvary jumped out to an early 10-0 lead, Ozark regained composure, cutting the lead to as few as 4 points until Hajj Green found a groove and scored 9 points during an 18-5 run.   The second half was a battle, but the Warriors never gave up the lead, expanding it in the last few minutes by as many as 19 points, and finally getting the win 86-72.

The men and women are back in action on Friday in a doubleheader against Barclay College at home. The women will play at 5:00 and the men at 7:00.