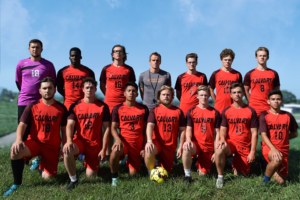 KANSAS CITY, MO – The Warrior Soccer Team had a historic day Saturday. It was the team’s first win with Jayke Maples as the head coach.  Calvary ended the day with an outstanding 4-1 victory against Barclay College. During the first half of the game, the Warriors were absolutely on top of things. Cobi Keel connected to score the first goal with a beautiful volley and was assisted by Ethan Zeeryp.  Jeovanny Castillo managed a breakaway and found the net for the second goal with an assist from Keel. Next up, Clay Williams scored his first goal of the season with an assist from Castillo. The final goal was scored by Noah Mccubbin and assisted by Bayron Mendez.  “The team had incredible organization and defense which made any through play extremely difficult”, said Head Coach Jayke Maples.   “Cooperation is king and the boys did a fantastic job on offense. Warriors are tough and we certainly acted tough!  The boys played great! They still have some chemistry, and timing to work on together and I think that if we can see that kind of chemistry develop, you will see a similar score line for many games to come!” The next game for the Calvary Warriors will be on Saturday September 11 against Emmaus Bible College in Ankeny, Iowa.