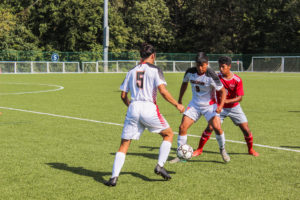 Calvary University Men’s Soccer took on both Faith Baptist Bible College, and Emmaus Bible College over the weekend. Although both games resulted in losses, Coach Nichols was positive about what he saw in the team over the weekend. “I was proud of our guys this weekend and the Christ like character and attitude they showed over the weekend,” said Coach Nichols. Friday afternoon, Calvary took on Faith Baptist Bible College in Ankeny, Iowa. The Warriors started the game strong, creating many good opportunities and looks. Unfortunately, the Warriors were unable to capitalize on those opportunities, and Faith took a 1-0 lead midway through the first half. The Warriors responded however, and tied up the game with a shot from Oscar Palafox, assisted by Clay Williams. The Eagles were able to regain the lead just before the half, and scored once more in the second half to win the game 3-1.

The Warriors next traveled to Dubuque, Iowa to take on the Emmaus Eagles. Saturdays contest between the two teams proved to be very evenly matched, with both teams creating scoring opportunities. Emmaus was able to take a 1-0 lead over the Warriors going into the half.  Although Calvary dominated in the second half with controlling the ball and creating scoring opportunities, they were unable to find the back of the net and Emmaus was able to take the 1-0 win over the Warriors. “It was a very evenly, hard fought game,” Coach Nichols Said. “It was a great game and I am so proud of how they fought.”

The Warriors will next take on Ozark Christian College at home on Tuesday.