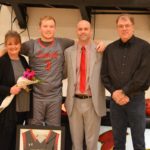 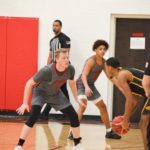 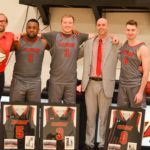 Zak Kirkman was not planning on playing basketball in college.  The plan was to attend a local community college and hope that something came up after that. “God had a much better plan than I did,” stated Kirkman.   “At one of my last tournaments, Coach Matt Sanders approached my high school coach, (Kevin Kirkman) and asked him if I would be interested in playing ball at the next level.” After that game Zak talked with Coach Sanders about possibly pursuing a career at Calvary University. He was very skeptical at first because he was not a fan of big changes and moving away from home. Things changed when Zak showed up on campus for a visit however. He was met with an atmosphere at Calvary that was impressive to him.  “God opened so many doors that I never would have imagined for me to come to Calvary,” shared Kirkman. “When he opened the door through being accepted into The Nikao Leadership Institute, I knew that I would be playing basketball for Coach Sanders, and the Calvary Warriors!”

Zak came to Calvary after a distinguished high school career.  During his freshman year, he and the team made it to the state semi finals before losing.  That led to a lot of hard work over the summer and attending several PGC basketball clinics. It paid off as he helped his team to win state during his sophomore campaign.  He made it back to the state title game two more times before graduating as a state champion.

Zak has truly impacted the basketball program and the entire campus throughout his time here. “I am so grateful for the relationships that I have built over the past four years,” shared Kirkman.   “There have been so many brothers who have come through this program that are a joy to be around. I am grateful for the seniors Braydon and Ques who toughed this 2020 year out with me, and we got so blessed in 2021 because of it. I am grateful for the culture that we have built at Calvary over the past four years.   We love each other no matter what. No matter what state, culture, ethnicity, past, or even what phone brand you rock. We are brothers and we go out and have each other backs every day. I am grateful for the accountability that I have from my teammates and the love that each of them shows me every single day.”

Zak made a large impact on the court during his four years.  He experienced a lot of highlights.  CU was able to compete against a Division I NCAA school that made the tournament in 2016.  They played in the Conference title game one year ago and were also able to celebrate Calvary’s first ever Regional Championship ten days ago.  Zak has also experienced a lot of adversity.  His first ACL injury happened in November of 2017.  This was during his freshman year. “The injury was very tough for me,” stated Kirkman.  “I would say my main focus was basketball and what I could do on the court. Through the midst of that injury, I experienced a lot of emotions. But, through it all God was faithful to me and He spoke to me through certain people. He worked on my pride and my arrogance, and he allowed me to see how I was here for His purpose and not my own.  He had a much greater plan than just allowing me to play basketball at the next level. Through this injury I gained a level of respect for the game that not many people have.  I was able to see how blessed we are as athletes to be healthy. I never take it for granted when I am healthy or able to play, because it is a blessing that not everyone gets. It refocused my leadership and how I treated my teammates.  I was able to love and support them more as I was off the court and that helped mold who I am on the court now.”

Unfortunately, Zak had to go through a second ACL injury that cut his season short.   This injury happened during his senior season. “Going through my second ACL injury in my senior season has been very difficult, said Kirkman.  “I had worked really hard to get myself back on the court and I had been performing well. Since the injury, it has been difficult to watch my brothers go to war each practice and game without me on the court. But something that God has really been working on me with is finding the joy of seeing my teammates succeed at the level they are succeeding!”

Zak has been challenged through the season even in the midst of adversity.  His leadership has flourished.  Coach Sanders has trusted all three captains with decisions and strategies for practices and games.  The focus has often been on learning through the losses as well as the wins.   The mantra for this CU team is that they can’t lose if they learn something from each loss and apply it the next practice and game. It has been their focus as leaders since the beginning of the year, and it was front and center during The NCCAA Regional Championship! Tomorrow they play for the right to go to the Final Four.

Zak Kirkman has battled so well for four years. Braydon, Ques, and Zak have made tremendous strides on this journey as they seek to be faithful leaders.  Thank-you is not enough for these three guys.  Calvary University is so grateful to have had the chance to have each of these guys wear Calvary Red.  Tomorrow we will cheer them on, but they each would be the first to tell the world that all of our praise and cheers should go the God who put this team together.