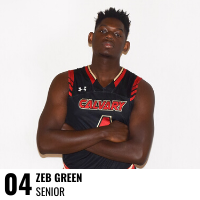 Zebulun Green started his basketball career during his sophomore year of high school at Lighthouse Christian Preparatory School in Abbeville, Louisiana. He was one of the starting five for the team by the time he was a junior. In his three years of high school basketball, Green won multiple awards. During his senior year, Green was announced Most Valuable Player and was presented with the Christian Attitude Award. His team also won the Varsity Basketball State Championship in 2015.

During Zeb’s sophomore year he took a hit as he tore his ACL during a game on November 6th, 2017. This was one of the hardest trials he had experienced. This ACL injury took a substantial toll on both his physical and mental health. It was during this time that Green held onto the promises of God. He lived by one of his life verses, Philippians 4:13, “I can do all things through Christ who strengthens me.” This was proven to be true during his road to recovery.

Green had surgery on his ACL in March of 2018. Immediately after surgery, Green began the healing process at SERC Physical Therapy in Belton, Missouri. With the help of many therapists, whom Green still keeps in contact with, he was improving faster than expected.   Green stayed in Kansas City during the summer of 2018 to continue physical therapy. It was also during this time that he was employed with a bus company in Belton working hard, physical labor. Between his physical therapy, job, diet, and daily workouts, Green lost about sixty pounds that summer.

By the beginning of his junior year, Green was already back on the court. Despite the resistance from wearing an ACL brace, and occasional pain, Green had a phenomenal season. He averaged fifteen points and eight rebounds a game. Green was awarded First Team All-Conference and First Team All-Region.

Green is now finishing his senior year at Calvary with one of the best seasons he has ever had. He is currently averaging eighteen points and ten rebounds a game. He has added fourteen steals and nineteen blocks to his career stats as well. Green has already been presented First Team All-Classic at an NAIA tournament held at Ottawa University in Ottawa, Kansas. Today, January 31st, we celebrate that Green has surpassed 1,000 career points in his Calvary career.

There is never a time where Green ceases to give all glory to God. He is a skilled, yet humble athlete.  It was not easy to come this far. It took years of hard work and dedication. Green admits this, but he also admits that despite his efforts, he could have never made it without the help of God.

As Green finishes his senior year of college basketball and graduates from Calvary University in May of 2020, Green only has one plan set before him: To go wherever God takes him.

We are so grateful to have the opportunity to have known Zeb Green.  He exemplifies what a Warrior is all about at Calvary University.  Well done Zeb!