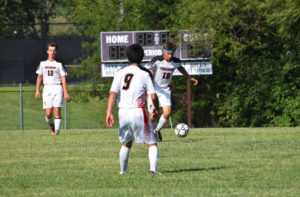 The Warriors were looking to build on the momentum from their victory last week vs. Barclay College as they took the field against the Kansas Christian College Falcons Tuesday afternoon. Instead, the Warriors fell short in the 0-7 match in Belton.  “We had a slow start,” Warrior Coach Daniel Nichols said. “We just didn’t recover well after letting them score early in the game.” The Warriors and the Falcons have met twice in 2017 and 2018 with the Falcons winning all four matches.

As the match began, the size, speed, and strength of the Falcons showed as they scored the first goal five minutes into the game. The Warriors gave up three more goals before the end of the first half but battled back towards the end of the half. They closed the half with a great shot from Takuya Takagi that bounced off the post.  “We were able to lock things down and create more opportunities.” Coach Nichols said.

In the second half, the Warriors tried a different formation that created more scoring opportunities. Unfortunately, their rally was quickly squelched as the Falcons scored three more times to take a commanding lead. Despite several attempts, the Warriors could not breakthrough the Falcons defense and finished the game 0-7. “It was a tough game and both teams fought very hard,” said team captains Masaki and Noah. “We are sure that this game helped us to prepare for our upcoming conference game and tournaments.”

The Warriors will look to bounce back Thursday on the road against Manhattan Christian College.