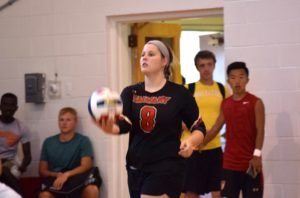 Calvary volleyball was at home Tuesday evening to face Union College.  CU proceeded to claim the home court advantage and capture a 3-0 victory.

Set one saw Calvary start out strong with an 11-6 lead, but Union narrowed the gap before the Lady Warriors closed out the set with a 25-15 win.  In set two, Calvary came out strong with a 7-2 run, thanks in part to four consecutive kills by the dynamic frontcourt duo of Kaela Gingrich and Anna Holloway. Although Union matched up well the remainder of the game, they could not overcome the early deficit and dropped set 2, 17-25.  The third set found both teams well-matched, but a strong 7-2 rally as the match was winding down by the home team, helped Calvary finished strong 26-24.

Lack of errors proved to be key in the ladies’ home game win, as they posted a hitting percentage of .24 for the game, while Union hit at .18 percent.

The Lady Warriors record now stands at 4-3, and they will return to their home court this weekend to host Faith Baptist Bible College at 6 pm, CDT.