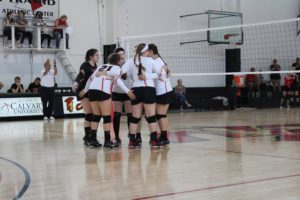 The Calvary Warriors volleyball team continued their impressive start to the 2018 season as the team defeated Kansas Christian College (3-0) on Tuesday to move to 3-2 on the season.

“It has been a good start to our young season,” Warriors Head Coach Ashley Spicer said. “We’ve had great contributions from several individuals at key times. We still have a lot of individual work to do which will improve our team play.”

In the match Tuesday, the Warriors battled the Falcons.  The Warriors came out with solid hitting and setting from the start. Tori Stahr provided the assists offensively as the sophomore had 22 assists for the match. Her spark helped the team to take the opening set 25-17.

The Falcons came back looking to even things up in the second set as they did some nice things.  Thanks to their hustle and 18 service aces, the Warriors created their own energy and motivation in sets two and three, winning both with the scores  25-12, 25-12.