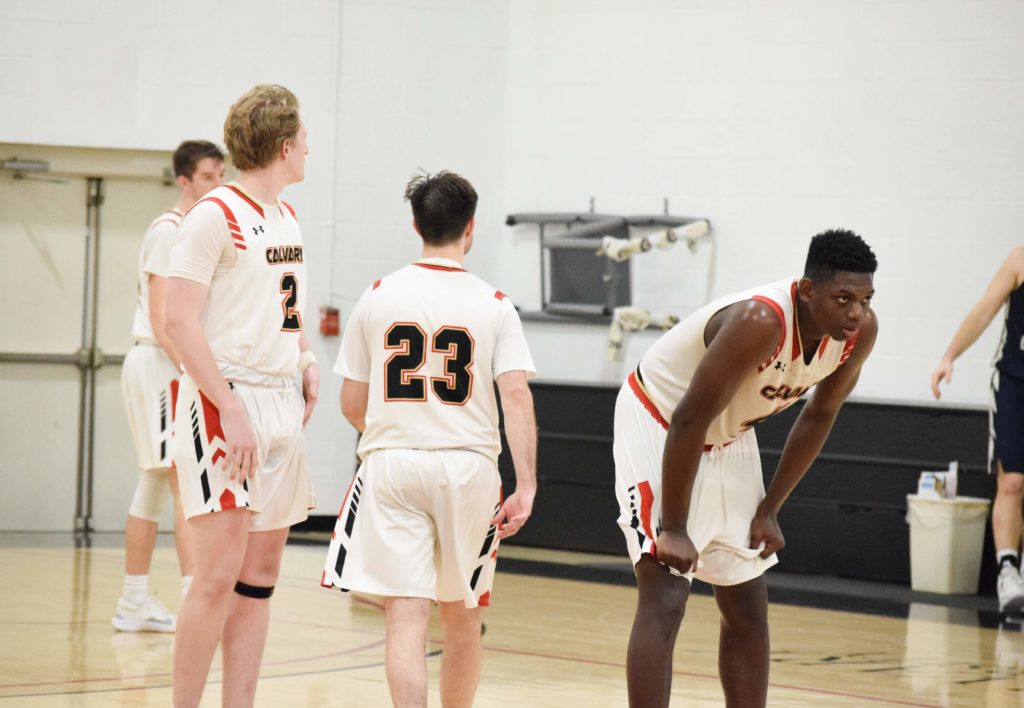 Seniors Tim Marchbanks, Jay Lems, and Zeb Green were honored before the game and Braydon Unruh scored his 1,000th career point (more here), as Calvary erased a 13 point deficit in the second half to comeback and defeat the Crusaders 75-71.

Both teams were evenly matched as the game opened, and over the first 10 minutes the lead changed hands multiple times and the game was tied even more often. One of the ties occurring on a three from Braydon Unruh to put him past the 1,000 career point mark. Over the next five minutes Dallas Christian went on a 7-0 run, as Calvary was continually unable to get a rebound off the first Crusader miss leading to second and third chance opportunities for DCC. Over the final five minutes of the half the Warriors were outscored 14-8 and went into halftime trailing, 43-33.

In the second half, Calvary got off to a slow start and trailed by 13 before Zeb Green scored the Warriors first points of the half after nearly three minutes. CU then started chipping away at the Crusader lead. With just under 15 minutes to play Green again scored in the paint, the basket coming off of a great assist from Ques Harris, and cutting the Dallas Christian lead to seven. The Crusaders, however, were able to extend their lead back to 12, but Benjamin Jones knocked down a three which stopped the bleeding for Calvary. The Warriors then began to put it all together trailing by nine with just under eight minutes left, CU turned up the defense and held Dallas Christian to just eight points for the rest of the game, leading head coach Matt Sanders to call the effort, “as good a second half of defense we have played all season.” Calvary cut the lead to six after a Cam Bender steal and assist to AJ Bordallo for an old-fashioned three point play. And on the next Warrior possession, Bordallo took the ball coast-to-coast for an uncontested layup to cut the lead to four with seven minutes remaining. The lead stayed at that margin until Green was able to score down low off another Bender assist and cut it to two with under five minutes left. With three minutes to play, Green cut the lead to just one and after a pair of missed Crusader free throws he tipped in his own miss to give the Warriors their first lead since the first half. With two minutes left Dallas Christian retook the lead, but wouldn’t make another field goal in the game. With 40 seconds left it was Green again who gave the Warriors their final lead of the night. Braydon Unruh then split two pairs of free throws to give Calvary a three point lead. At the other end, Dallas Christian was fouled shooting a three pointer, but only connected on one of the three free throws. Benjamin Jones then knocked down a pair to ice the game for Calvary and give the Warriors a 75-71 Senior Night win.

After the game head coach Matt Sanders talked very highly of the three graduating seniors saying, “Tonight was the culmination of four years of incredible growth, change, and God’s provision for this program. This win and this season wouldn’t be possible without Zeb, Jay, and Tim. They’re the pillars we have built this program on and God has truly blessed it and us.”

However, the game could have gone very differently for Calvary had Dallas Christian been able to knock down their free throws. Troubles from the line plagued the Crusaders all night as they shot only 34% and missed 13 in the second half alone. The Crusaders also shot only 18% from three point range, but were able to grab 18 offensive rebounds and shoot 41% from the field. The Warriors to their credit never gave up, and shot 48% from the field, while assisting on almost half of their made baskets.

In his final home game, Zeb Green had yet another double-double leading the Warriors in both points and rebounds with 20 and 13 respectively. Benjamin Jones had 15 points and 6 rebounds. While Braydon Unruh and Ques Harris added 11 and 10 points.

D’Aaron Davis lead the Crusaders with a double-double including a game high 30 points and a team high 10 rebounds.

Calvary moves to 12-12 on the season after the victory, and will look to close out the regular season with a win on Monday afternoon at Ecclesia College.